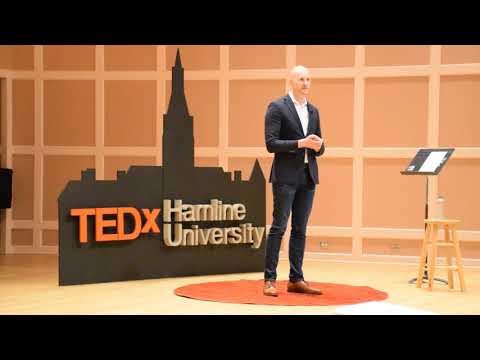 When all the world’s a stage, mass shooters, terrorists, street gangs, and hate groups perform violent acts for the notoriety that they bring. Technology has created an economy of consumers, producers, and distributors of violent victimization, and violent offenders want the audience to look before they look away, says criminologist James Densley. Urgent yet hopeful, this talk explores the proliferation of violent content across the internet and the tools we can all use to minimize our exposure and subscription to viral violence.

Criminologist James Densley studies violence so that one day we might not have to. He’s a Professor of Criminal Justice at Metropolitan State University in St. Paul, Minnesota, and a Fellow of the Hamline University Center for Justice and Law, where he co-leads a mass shooter database project funded by the National Institute of Justice.

Lead Videographer: Autumn Vagle
Assistant Videographers: Anna Heckmann, Emma Larson
Introductory Graphic: Jackson Cobb
James Densley is a British-American sociologist. He’s a Professor of Criminal Justice at Metropolitan State University and Fellow of the Hamline Center for Justice and Law, where he co-leads the mass shooter database project funded by the National Institute of Justice. Densley has been an invited or keynote speaker on three continents and has received global media attention for his research on street gangs, criminal networks, violence, and policing. He is the author of two books, including the award-winning, How Gangs Work (Palgrave, 2013), and more than 50 articles and book chapters. His writing has also featured for CNN, The Conversation, The Guardian, HuffPost, and The Wall Street Journal. This talk was given at a TEDx event using the TED conference format but independently organized by a local community. Learn more at

Thank you very much. I wish this talk was much longer. There is a lot of insight here and I would like to somehow contribute- if this is not a naive idea…Violence is so hard to bear.. a very heavy burden on my shoulders really. That is exactly how I feel yet do not know what-if anything- I can personally do this suffering.

This should be viewed by Millions

Is there a group I can join for anti-violence in the media? how come it seems like more people don’t care about this issue? the world needs more goodness and media that promotes peace, not dark sadistic programming. TY 🌎

Truly a brilliant mind and an even better human being.

"Your attention is your power. When we lead, no one has to bleed."

Effectively Networking In A Virtual World